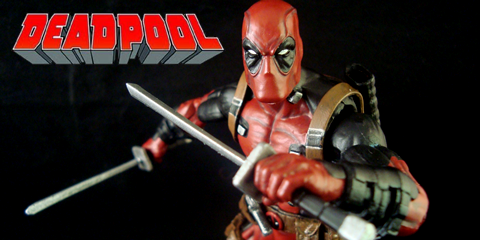 Had a lot of fun with this (ergo, all the pictures), my 3rd attempt at Marvel NOW! Deadpool. I tried to get this figure as close to the very first image released featuring his Marvel NOW! look, just before his current series was launched. Check the comparison in the first photo! Over the years his costume has been relatively consistent. What minor changes he has endured have been very cool, and fun to figure out how to work into a figure that fits into the current, and also updated, Marvel Legends line. I like to give each of my Deadpools a unique custom weapon, so this guy got his very own chainsaw gun!

I used a Bucky body, with the new Wolverine legs and arms, the new ML DP head, sculpted the shins and forearms, lots of weapons and a ton of fodder.