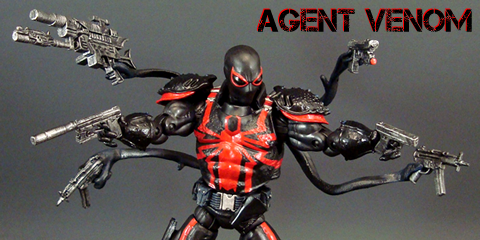 As popular as Venom is I have to say that Flash Thompson’s Agent Venom is my favorite incarnation of the character. This is Agent Venom like you’ve never seen him! He comes with 3 interchangeable heads (Masked, Symbiote, and Unmasked Flash Thompson mid change head). He comes with 2 sets of interchangeable hands (gun hands and symbiote claws). He has 2 sets of tentacles (gun holding and symbiote). And he has a ton of custom made guns including his Multi-Gun that Flash has throughout his series that can form into 4 different versions via magnets. I finished him off with a red Thunderbolts style paint job with gloss, metallic, and blue highlights to his suit! Enjoy!