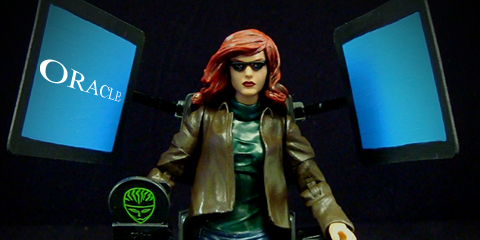 My new commission is one I’ve been wanting to do for some time. In The Killing Joke Barbara Gordon was shot in the spine by the Joker and crippled for life. Her career as Batgirl was over, but her life as Oracle would soon begin. As Oracle Barbara is the “Wizard” behind the curtain for Batman, guiding his forces through the battlefield of Gotham!

There have been many looks and versions of Oracle, from simple to very complex. I went with a mix of her look from Barbara’s first appearance as Oracle and how she looked in Jim Lee’s Hush. She has her staple leather jacket and turtleneck sweater, jeans and boots. Her chair is an articulate creature in it’s own right. It is equipped with removable dual computer screens and hand controls, so it can serve as her own personal mobile command center. Barbara also comes with a laptop computer with her Oracle symbol on it, a pair of billy clubs, and her trusty 357 magnum!

Oracle was made from a Buffy base figure with Emma Frost feet, ML Hope Summers head with someone else’s glasses. She has 2 sets of interchangeable hands, and a deeply shaded paint job from head to toe. Enjoy!