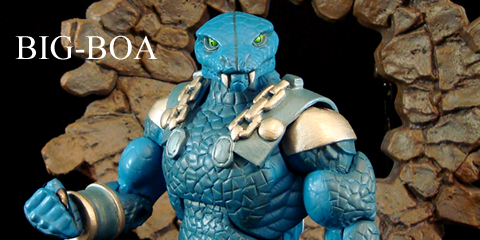 Big Boa is the crushing enforcer of Lady Slither’s Snake Men army. He is battle tested and has never lost a fight, all of which he has won with his bare hands. Aside from the massive strength he delivers with each pounding blow from his fists, Big Boa’s weapon of choice is the wiping power of his own tail! No one that know’s Big Boa stays for the fight.

Big Boa was made from a MOTUC Rattlor body with a Snake Man guard head, Guile fists, sculpted wrist guards, shoulder armor and chains, as well as the scales on his arms and body. Finished him off with a seriously deep shaded Filmation style paint job. Enjoy!