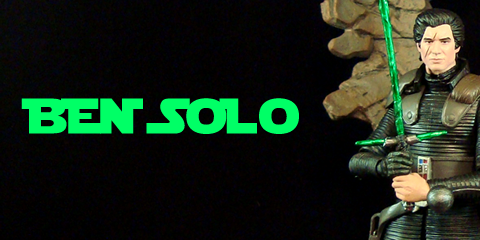 I’m a huge Star Wars fan, and for me, The Force Awakens was perfect. So along with everyone else I’ve developed some theories of my own, and a new wave of “What if…” Black Series figures. I’m calling the first four TFA Wave Zero.

The second figure in my Wave Zero is Ben Solo. Star Wars has always centered around a Skywalker,  so as the son of Leia, I see Kylo Ren embracing  the Light Side of the Force. After killing his father, Han, he makes a face as if he has been weakened and maybe displays a bit of regret. Knowing that killing Han is an irredeemable offense, what if his journey takes him to the light side in an effort to pay respect to his father and his lineage? In doing so Kylo retakes his birth name, Ben Solo, and after hearing about Rey’s turn to the Dark Side, he joins forces with Chewie and the resistance. As a result of his change he is able to retain both his Dark side and Light side powers. It’s a long shot, but what if?

Ben was made completely from a 6″ Black Series Kylo Ren figure, a Han Solo head with newly sculpted hair and facial scar. He comes with a new custom made green cross bar light saber, belt and blaster, and 3 interchangeable hands including a force hand and dark side force power hand. Enjoy!