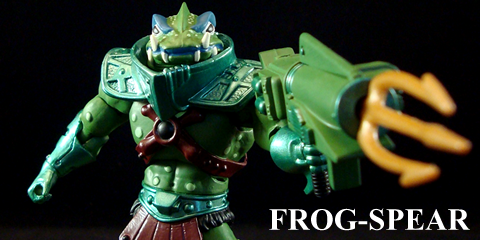 The menacing intergalactic bounty hunter, Frog-Spear, it known for cracking jokes as he immobilizes his bounty with his positron trident gun. He sells his talents to the highest bidder, but is more interested in big game hunting. And he’s in town for the biggest game around: He-Man!

Frog-Spear was made from a MOTUC Hydron base, Flogg and Skeletor armor, Tung Lashor head. His warts are raised puffy paint, and his Frog-Spear is a custom build. Wrapped up in several shades of green and metallics! Enjoy!