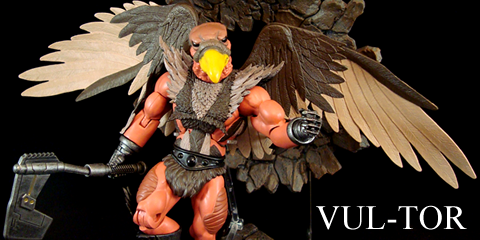 Hailing from the realm of Vul, He-Man’s newest ally, Vul-Tor, is the last surviving member of his race. Having been destroyed by Skeletor, Vul-Tor has vowed to avenge his people. The flap of his wings can blast a hole in the most vile of Skeletor’s ranks, and Vul-Tor is armed with the traditional weapon of his people, his vibro-hench; a blade so powerful it rivals He-Man’s power sword.

Vul-Tor was made from Hordak base and feet, Nepthu boots, Extendar arms, Galactic Skeletor hands, Angela wings, the chest and shoulder feather armor is from an anime figure, and the head is from a Thundercats figure heavily moded. He also features sculpted details on his legs and body feathers. Finished with a bold Filmation paint job with metallic highlights. Enjoy!

Posted on May 13, 2016, in Masters of the Universe and tagged ac custom action figures, custom toys, he-man, masters of the universe classics, skeletor. Bookmark the permalink. Comments Off on Vul-Tor (MOTUC Original).