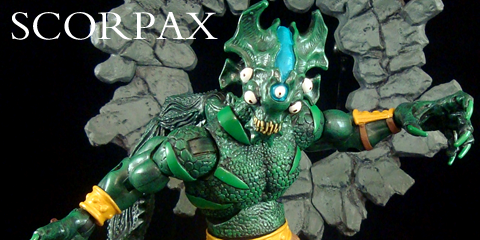 It is said that the Great Eternian Dry Lands are filled with some of the most extreme life in all Eternia. Scorpax is a wanderer of those lands, and one of the most menacing creatures to dwell there. Scorpax is the reason these lands went dry. Once stories started spreading of an enormous part man part scorpion killing all that cross his path, the Dry Lands were abandoned. Scorpax is intensely strong, and can paralyze and then crush his prey with one swoop of his tail! His favorite move is to play dead, and then go in for the kill! Scorpax has been known to appear in battle when it is waged too close to his territory. And he doesn’t care who’s side he’s on. Scorpax was made from a MOTUC Slush Head body and legs, Count Marzo arms, Zodak boots with Flogg feet, ML Venom hands, and a modded DC Red Lantern head. He has sculpted detail and a highly detailed and shaded, dry brushed paint job. Enjoy!

Posted on May 30, 2015, in Masters of the Universe and tagged ac custom action figures, he-man, masters of the universe classics, motuc. Bookmark the permalink. Comments Off on Scorpax (MOTUC Original).