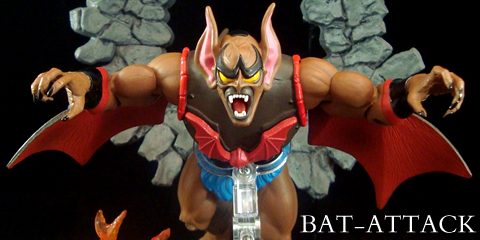 The newest recruit to Hordak’s Evil Horde army is Bat-Attack! As one of the younger members of Batros’ Bat clan, and  always eager for a fight, Bat-Attack got his name from being the first and fastest in battle! If you are ever on an Eternian or Etherian battlefield and body parts start falling from the sky, don’t look up! Chances are the last thing you will see is Bat-Attack! With a fully articulate neck, Bat-Attack can look straight up, or forward if he is in a flying pose. He also has a fully articulate tail for snatching up his enemies from the air! Bat-Attack also has a Filmation inspired paint job with bright bold colors and deep shading.

Bat-Attack was made from a MOTUC base, Batros skirt and biceps, DCUC Parademon head and Etrigan hands, Stratos lower legs, and Slush Head feet. Finished with a Filmation style paint job. Enjoy!