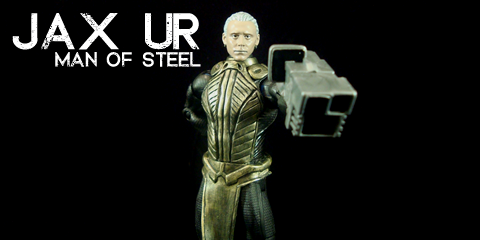 Some of you may remember back when Zack Snyder’s Man of Steel movie came out I did a Man of Steel concept figure line for characters that were not in the film. One of my biggest fans of that line commissioned me to add a couple to his collection. First up is the Kryptonian mad scientist, Jax-Ur! He appeared in the movie briefly, but I wanted to give him a younger look with a bit more personality. I based his armor on concept are from the film, and wanted it to fit in with the Jor El figure. I gave him a ghostly pale complexion, and he comes with his hand held Phantom Zone gun so that he can do away with anyone who crosses him. I figured that was way better than the space dildos they used in the movie.

Jax Ur was made from a MOS Superman with a Loki movie head, Magneto sash, and sculpted armor. Finished him with a Kryptonian paint job. Enjoy!