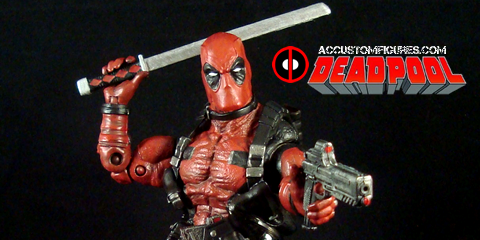 For my latest attempt at the Merc with a Mouth I went with the customer’s specifications. He’s a mix of classic and Marvel NOW! Deadpool. This guy comes FULLY tricked out with just about every weapon you could think of with maybe one exception being an exploding taco! The centerpiece of the figure is the customer’s request to have something that Wade could carry all his stuff around in. I told him it would be a surprize, and that surprize is…! A trash can!!! That’s right! Deadpool has his very own trash can that holds all his toys.

Deadpool was made from a 2013 cast head from Corey at the Casting Cave, BP body, DD boots, Cap forearms and Sup Spiderman hands. The rest is fodder and sculpted detail. I hope his new owner shows him who’s boss, and enjoys him as much as I did making him.