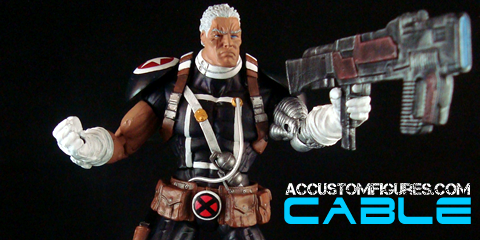 My favorite Cable has always been from Chris Bachalo’s run on the book where Cable re-joins the X-Men with Sabretooth and some other oddballs. This was also the suit he wore whith baby Hope strapped to his chest. That’s the suit. The design of the figure was also inspired by LooseCollector’s Olivetti style Cable he did last year. I love the white constrasted with the dark blues and blacks, and that star on the armor is super cool. Then there’s the gold highlights with that crazy tube running out of his chest. Love it. Cable comes with custom made weapons including a laser blaster, handgun, and custom made B.A.G (Big Ass Gun!)!

Cable was made from Rogers lower and Conan upper, Super Patriot arm, Cap gloves, and Grayson boots. Lots of fodder and the rest is sculpted detail. Finished him with a custom paint job metalic highlights, several shades of black and blue, and a bit of gun metal! Enjoy!