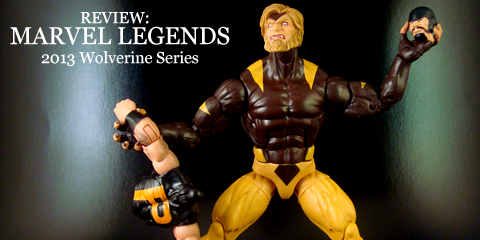 Thanks for checking out my first action figure review! Better late than never, right?

This week I am reviewing the newest series from Hasbro’s Marvel Legends, the Wolverine series! Since Marvel Legends came back last year, Hasbro has been pumping out a new series at least every quarter. Each figure line up has been a mix of classic characters in various costumes, and some newer characters from the Marvel Stable. This newest series, the Wolverine series, is made up of 4 X-Men related characters, 3 of which come with parts for a 5th BAF, or Build a Figure. PUCK! But we’ll get to him.

First up is the series’ namesake, Wolverine. Here in his kind of classic yellow outfit, however, the actual figure is just a repaint of the previous X-force figure, so they left the not so classic boots on (which are actually pretty cool buckled boots). Wolverine is a cool sculpt, though still not in scale with his actual stature. The head is one of the better sculpts Hasbro has come out with, and they finally fixed those sloppy claws that every Wolvy figure has had. His gloves have the same textured look and feel as the boots with the buckles, the paint apps are decent, and he is the only figure that does not come with a Puck BAF part. Pucks legs detach pretty easily (much easier than his arms), so I don’t know why they randomly gave Wolverine a stand instead of said Puck legs.

Next up is Wolverine’s arch nemesis, Sabretooth. The time I spend with Sabretooth the more I like him. At first I didn’t like his knock-kneed legs that seem a bit stubby for him, and he has the same body sculpt as the previous series’ Hyperion. Both suffering from the Rob Liefield Captain America “Chest boob” syndrome. However, Sabe’s head sculpt is great! His clawed hands are great, and his paint apps are smooth, though I don’t know when he appeared like this in the comics.

The 3rd figure is Emma Frost. I have really liked the previous series’ female figures, but Emma is just boring to me, and this figure is the most boring version of her that there is. I don’t know why they didn’t do the current one, or Emma in a really cool diamond form, or with a fluffy collar like in her White Queen days. I like the sculpt, and the head is cool. But the facial paint apps suffer from that wonky eye thing that her and a few other figures, like Hyperion, have had. Her hair is great, and I like the fist and open hand, and her high heels with the new ML ankle articulation is dope!

Last in the regular series is the General of the X-men, if there ever was one, Cyclops. I’m torn on this figure. I love the character, but he seems to always fall by the wayside in his figure form. This one is the best so far, but still has out dated paint apps that have zero texture and sloppy line work. I like the fist hand and the 2 finger hand. The head sculpt is pretty accurate but simple. I just wish there was a little more to this guy.

Last up is the Puck BAF! For some reason Hasbro has been really skimping on the BAFs this time around. They started off kind of cool with Terrax and Zola, but they were nothing like the mega sized Sentinel, Giant Man, or Fin Fang Foom. Then they just got smaller, ridiculously smaller with the marginal Hit Monkey, Rocket Raccoon (I dig it though), and now the smallest, Puck. All that said, I love this figure! His wrists and abs could use a bit more articulation, but his face is awesome, and the rest of his articulation is great. They even gave his hips and butt sculpt a bit of a tilt to add to the realism of his stature.

All in all this a very simple series, but I think it’s high points are found in that simplicity.