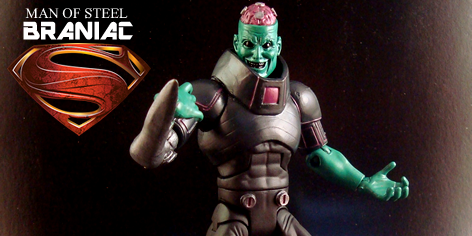 Continuing my “What if…Man of Steel” line is (according to my girlfriend) Brainiac! As Brainiac is traditionally a being of science, I wanted to go with a “mad scientist” look, but also a product of science with a Frankenstein look. Ergo, his heavy booted appearance, and abnormally elongated bionic arm.

Brainiac was an unfinished product of Jor-El’s science team. After a surprising escape from the dying world of Krypton, Brainiac drifted through space for years without a ship nor any intelligent interaction. Brainiac unknowingly travels slowly through the same trajectory draft as Kal-El’s ship, and plummets to earth. After realizing there is a Kryptonian living on Earth, he seeks out the son of El for answers as to why he was abandoned, and revenge for the years he spent alone.

Brainiac was a DCUC Luthor base, a DCD Luthor head that I hollowed out and stuck a brain into. A bunch of fodder and sculpt, and a gross custom paint job. Enjoy!