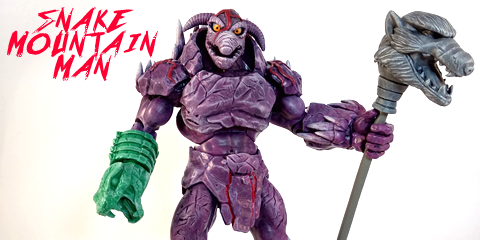 We all grew up with Castle Grayskull as the fortress for where the good guys hung out, and Snake Mountain where the bad guys hung out. So it was a massive pleasure when Mattel and the Four Horsemen turned Castle Grayskull into it’s own figure! For years I’ve been waiting for a similar production piece for Snake Mountain, but it never happened. So about 6 months ago I started working on my own concept in the form of Snake Mountain Man! Then the deal was really sealed last month when Super 7 unveiled the new Snake Mountain for the Masters of the Universe Classics line! That was all the inspiration I needed to finish my original concept figure.

This is Snake Mountain Man! He features all of the trademark highlights of the original play-set, including the green snake spire that serves as his right hand, and the gray stone wolf head that was the microphone on the vintage toy and is now a staff that he wields in his left hand! His head is an original sculpt that was taken directly from the main cliff face of the vintage toy, and his body is riddled with deadly spikes, carved faces in his rocky armor, and his skirt armor even features the blood red waterfall just like the play-set has. He also comes with a custom made blade-ax, and the figure features 75% sculpted detail, and the wolf head is almost entirely an original sculpt. He was finished off with a FILMATION inspired ACCF paint job with tons of detail work and dry brush effects. Definitely one of my greatest achievements as an artist. Enjoy!