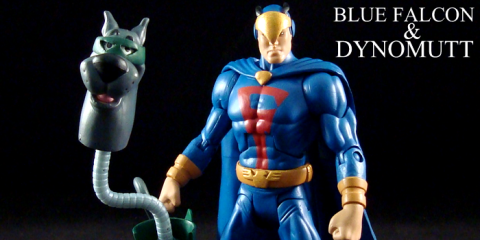 Blue Falcon and Dynomutt are part of a 6 figure Hanna-Barbera/Space Ghost family set of commissions, all made in the DCUC style. These figures brought me way back to watching all of these characters in the old Hanna-Barbera cartoons! Millionaire Radley Crown and his robotic dog fight crime as Blue Falcon and Dynomutt. These cartoons were first aired in the late 60’s and returned in the early 80’s, and have found a new life in today’s pop culture through comics and other mediums.

Blue Flacon was made from a DCUC Omac base, fodder cape, and sculpted belt, chest and head. Dynomutt was made from a Scooby-Doo base with a fodder cape, sculpted details on the boots, chest, and head His robotic neck is a ML Machine Man arm. Both wrapped up in an AC Custom Figures paint job. Enjoy!