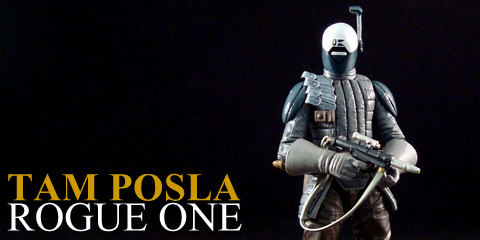 Flipping through the Rogue One Visual Guide I came across Tam Posla and had to bring this guy to life! From Wookieepedia: Tam Posla was an interstellar lawman representing the Milvayne Authority who investigated claims of kidnapping from the desert moon of Jedha. Though taken off the case by his superior officer, Posla, determined to bring the criminals to justice, became a bounty hunter. He carries a modified BlasTech Industries DL-17 blaster rifle. So… badass. Rumors are he’ll also turn up in the Boba Fett focused bounty hunters movie. He comes with his custom made DL-17 blaster and an articulate visor sighting antennae. Enjoy!

Tam Posla was made from a 6″ Black Series Poe Dameron base with a ML Machine Man head. More than half the figure was sculpted, and he comes with his custom made blaster. Finished with a Star Wars universe paint job. He fits in perfectly with Hasbro’s 6″ Star Wars black Series figures.