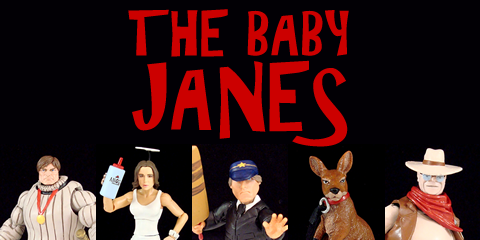 The Baby Janes are characters from a soon-to-be comic created by Darrin Grimwood, with concept art by Peter Lumby. They are “a gang of psychotic former child stars turned crime-fighters.” This was a great job, a challenging job, and I can’t wait to read the comic. I tried my best to make them as close to the original art provided, as the figures will be used in a technique that layers the animation over the figures. So they’ll be “models” for the comic!

The big guy was a MOTUC Dentist with ML Sabertooth legs, and Thor head, then I completely sculpted his hair, body, medalion, and candlestick! The woman was an MJ base, Buffy head, sculpted upper dress and wrists, and fodder. The small man was a MU Puck completely sculpted from hat to shoes. The kangaroo was an inarticulate zoo toy with a baby joey sticking out of it’s belly. I cut him out and resculpted him. Then I cut off his head and tail and re-attached them so that they are now articulate. His leash is real leather. The fat man was a Doc Oc base, Venom hands, Scarecrow hat, then I re-sculpted his entire hat, face and body so he’s fatter! Some fodder, and paint jobs finished them off. Enjoy! 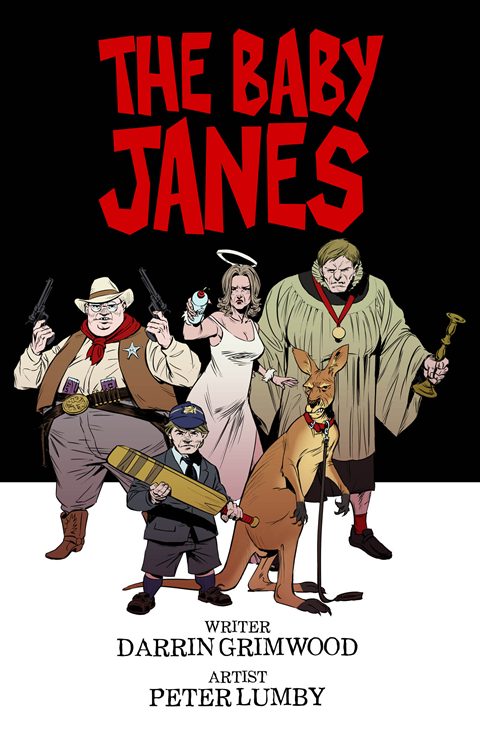