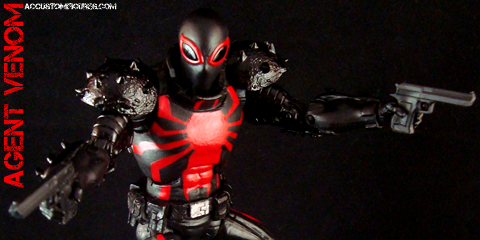 Flash Thompson’s Agent Venom design has really grown on me during his tenure as the character. A couple months ago I did a rewaorked Marvel Lgends style, black and white suit. Here is Agent Venom in his red and black suit that he wears in the super cool Thunderbolts series. This one was made completely from scratch, and was such a cool job that I’m going to do a tutorial on him after the auction.

This guy comes with all the bells and whistles, including 3 alternate magnetic heads (one Agent Venom, one Flash Thompson, and one full on monster Venom). The Monster Venom head is a completely original sculpt. The Thompson head has the ghosted eyes and beginings of his transformation. He also comes with alternate symbiote hands, and tendrils that attach to his back. He comes with a complete set of custom painted guns including 2 matching pistols, one laser sighted handgun, 2 rifles, and a space blaster!

Venom was made from a Steve Rogers base, Red Skull arms, Super Patriot legs, Sup Spidy head, Sentry, and custom heads, everything else is fodder and sculpted detail, including his entire chest peice. Enjoy!